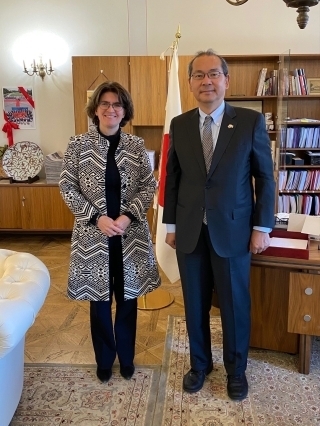 H.E. Ms. Sancisi, new Dutch Ambassador assigned to Slovakia in September, visited the Embassy of Japan. We have already known each other in diplomatic events, but visiting each embassy has a different meaning.

She served as Queen Máxima's private secretary for seven years before being assigned here, supporting Queen Maxima among others in her roles as UN secretary general’s special advocate for inclusive finance and member of the Netherlands committee for entrepreneurship. In 2019, she accompanied Queen Máxima on a trip to Japan. I learned a lot from the stories of royal diplomacy that is different from the diplomacy between the governments.

I would like to learn various things in the future as well from the new Ambassador, who has experienced royal diplomacy and speaks seven European languages.