horná stránka > September 20, 2021: Participation in a seminar within the Innovation Day project organized by the Ministry of Foreign Affairs and European Affairs of the Slovak Republic

September 20, 2021: Participation in a seminar within the Innovation Day project organized by the Ministry of Foreign Affairs and European Affairs of the Slovak Republic 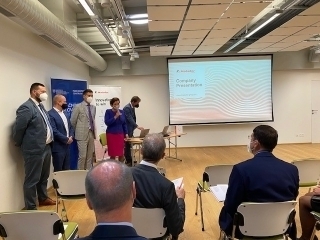 In September 20, I participated in a seminar at the Bratislava headquarters of Matador Holding. It was a seminar that took place as part of a series called Innovation Day under the auspices of the Ministry of Foreign Affairs and European Affairs.
The mentioned Innovation Day marks a project that started last autumn, which is held regularly once a month with the intention of introducing the ambassadors based in Slovakia and Austria to progressive and innovative Slovak companies. As a result of the coronavirus pandemic, most of the project's seminars have so far been held in a virtual online space, but as of June, it is again possible to visit companies at their headquarters and hear about individual companies directly from their CEOs. The host and moderator of each seminar is Ms. Ingrid Brocková, State Secretary of the Ministry of Foreign Affairs and European Affairs, which in itself indicates the enthusiasm with which she wants to introduce the interesting Slovak companies to the world.
Matador, which I visited at the last seminar, has been writing its history since 1902. It focused on the production of car tires, but by entering the new millennium, the company was transformed to automotive design, digitization and systematization of automotive production. At present, Matador's innovative technologies are also used in the largest German car manufacturers.
As part of the Innovation Day project, I have so far had the opportunity to get to know and get acquainted with several successful Slovak companies. Mention should be made of Multiplex DX, which has developed PCR tests, among others, as well as SLIDO, which has developed an application that can collect and display the results of a survey of international conference participants on the spot, and AXON Neuroscience, a company dedicated to the development of drugs effective in Alzheimer's disease or the IPM Group, which is working on experiments to create a society based on full recycling and a zero carbon footprint in line with the goals of sustainable development. All the companies that I have visited so far as part of the Innovation Day project have left a deep impression.